The May 2021 Security Patch update was initially rolled out to the Galaxy S21 and S20 Series last week. Samsung has now begun sending a similar update to the Verizon-based Galaxy Note 20 Series. 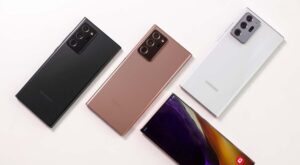 The updates appear with a few changes apart from the monthly security patch. Both smartphones share the same changelog. The firmware brings the new Dual Recording camera mode and enhancements to Quick Share for easily sharing files to other Android devices. Users can now record video with front and rear cameras in the dual recording mode simultaneously in Split-screen or Picture-in-Picture views. It captures both sides of the conversation, or alternatively, you can record your own commentary while shooting shareworthy videos.

The updates are gradually rolling out to the respective devices in a staggered way. So, the Galaxy Note 20 Series users at Verizon may need to wait for a few days to grab the update. The update can also be checked manually from Settings>Software updates>Check for the updates. If any update shows up there, install to experience new features and enhancements.

Must See: Android 12 features: Confirmed and Rumored so far.