The upcoming  Samsung device under the Galaxy F Series named Galaxy F42 has recently arrived on WFA while running Android 11. The listing has confirmed the model number and a few connectivity options of the smartphone.

If we go with the WFA listing, the new Samsung device will carry the model number SM-E426B. The phone comes with different connectivity options including Bluetooth, WLAN, GSM/WCDMA / LTE / 5GNR.

The certification was dated as ‘2021-05-20’. Besides these, there’s no word available about the more information of the smartphone. However, the device is confirmed to run Android R (Android R) operating system out of the box. We have dropped the screenshot from WFA below. 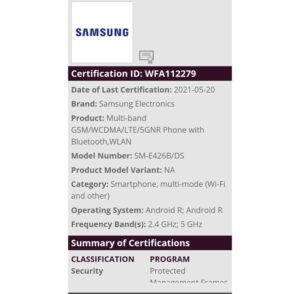