To recall, Samsung launched the Bixby in 2019 with some cool features. And recently, it was introduced in many new languages. Now, it seems like Samsung is looking forward to replacing the existing Bixby Assistant with a new 3D Virtual Assistant named Sam.

As per the post by a Twitter user (Via), the Samsung-owned Cheil Agency and the Lightfarm Studios have showcased the new 3D Virtual Assistant. The company seems to be shown it accidentally on the Lighfarm studios website, and it has deleted the web page. However, it still available to view through the Wayback Machine.

If we go ahead with the available leaks, ‘Sam’ is a virtual young woman with brown hair, blue eyes, and looks like the heroine in some animated movies. Interestingly, there’s a ‘Samsung Galaxy’ logo on her shirt. Many of them have confirmed that the character was created using the combination of Adobe and a few other software’s. 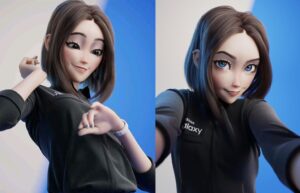 In the deleted webpage, the Lightfarm has mentioned, “The character, which already had a 2D existing version, underwent a complete redesign to return to social networks in a 3D version, much more modern, exciting, and with many more expressions, poses, and different textures,”. It has also stated that “Throughout the process, the team devoted itself to developing realistic materials, mainly for the character’s hair and clothing, so that Sam appeared aesthetically pleasing. Sam was an incredible partnership between the Cheil Agency and Lightfarm, and we are thrilled to be part of this project!”.

The removal of Sam’s Lightfarm page from the Lightfarm website hints that it is under development, and the company might have accidentally leaked it. Currently, the leaks of Samsung’s Virtual Assistant ‘Sam’ have put many of us in dilemma whether the new assistant is going to replace the existing Bixby or will be announced separately.

However, if ‘Sam’ comes official, it will be an excellent competitor to Google Assistant, Amazon Alexa, and Apple’s Siri. The new virtual assistant “Sam” is going to be the company’s third assistant after S Voice and Bixby.

Note: We cannot guarantee that the information provided on this page is 100% accurate as it is a leak!