In recent days, we have seen a couple of rumours about the Galaxy Tab A7 Lite. The device has also passed different certification websites carrying the specifications and model numbers. Now, ahead of the official launch, Samsung has leaked their own Galaxy tab A7 Lite tablet on their official website. 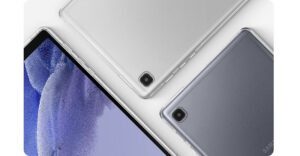 The leak was spotted by tipster Max Jambor (Via Mspoweruser). The Korean giant has officially posted a couple of accessories, including the images of the tablet. Apart from that, the dimensions of the gadget are also mentioned, followed by weight.

The tab measures 129.81 x 216.57 x 12.14 mm in dimensions and weighs 82.8 grams. The leak also revealed that the device comes with two different covers: book cover and transparent cover. Below are a few official images of the Galaxy Tab A7 Lite posted on Samsung’s website.

The device will be available for purchase in two different variants: 3GB RAM with 32GB internal storage and 3GB RAM with 64GB onboard storage. Moreover, the storage can also be expanded via microSD card support.

There’s a single camera on the rear side, and as per the rumours, it may come with an 8-Mp camera. For selfies and video calling, the Tab A7 Lite loads with the 2-MP camera.

Several rumours have confirmed that the device would carry a price tag of 150 Euro. The LTE variant is also expected to follow soon in the coming months.