It’s been a while since we heard any tablet launches from Samsung in the past few months. Samsung is now back by introducing a new tablet in the European markets. The new Galaxy Tab S7 FE 5G will be part of the existing Galaxy Tab S7 Series. Regarding the price, the new tablet costs around 649,00 € ($800).

If we go ahead into the specifications part, the Galaxy Tab S7 FE 5G hosts a 12.4-inch display paired with 2560 x 1600 (WQXGA) pixels of resolution and 16 million colors on display. In availability, the tab comes only in one variant, i.e., 4GB RAM with 64GB internal storage. Moreover, the storage can be expandable up to 1 TB using a microSD card. The powerful octa-core processor-based Snapdragon 750G Chipset powers the device.

Moving to the central part- the camera, Samsung has added an 8-MP single rear camera and a 5-MP front-facing camera. The videos can be recorded on Full HD (1,920 x 1,080 pixels) @ 30fps resolution. 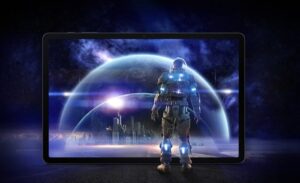 Unfortunately, Samsung has not mentioned the Android and One UI versions of the device. However, in most cases, the tablet boots with Android 11-based One UI 3.1 Skin. A 10,090 mAh massive battery backs the entire gadget with the support for 45W fast charging. Inside the box, there’s a 45W adapter.

Using the battery, the videos can be played continuously for up to 13 hours, LTE Internet can be accessed for up to 12 hours, Internet on Wi-Fi connection can be browsed up to 12 hours, and there’s a 201 hours Music playback time (nearly eight days).

The tablet measures 185.0 x 284.8 x 6.3 in dimensions and weighs about 608 grams. The sensors on the board include Accelerometer, position sensor, compass, hall sensor, and brightness sensor. Samsung has made the Galaxy Tab S7 FE 5G available only in the Mystic Black color option. Additionally, the tablet also features the S-Pen support.