As Samsung’s next unpacked event is getting closer, multiple leaks and renders have started appearing frequently. A few days back, the company has shown the Galaxy Z Fold 3, and the Galaxy Watch Active 4 in its new Good lock feature video. Today, the Galaxy Z Fold 3 design has been confirmed by some external source in 3 color variants. 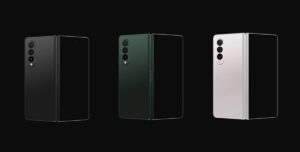 The three color variants were shown on the dbrand’s website. According to it, the Galaxy Z Fold 3 will be official in Black, Green, and Silver color variants. All the variants come with a triple rear camera setup followed by an LED flash. Nonetheless, these color pallet selections will not be available in Samsung’s official online store. Additionally, you can also change the color plates of the Back Skin and the Camera.

Users can pick custom color combinations and preorder them now. The shipment of preorders starts in August 2021. It means once after the Galaxy Unpacked event, Dbrand will start shipping the orders.

As of now, it is unsure whether it is the final design of the Galaxy Z Fold 3 or not. However, based on previous leaks, it seems that the model and the three color variants are going to be the closing design.

When will Galaxy Z Fold 3 Launch?

The recent leaks have confirmed that Samsung’s next Galaxy Unpacked event is going to be held in August 2021. On the other hand, last week, the official images of the new Galaxy Watch 4 Series have been surfaced on the Amazon Canada website.

In the Amazon listing, the launch date of the Galaxy Watch 4 Series is mentioned as August 27, 2021. So the leaks and Amazon listing have finally put us at confusion. However, as the days are getting closer, we can expect more information to anticipate soon.

UP Next: Apple Pay might soon step into Korean markets to take Samsung Pay’s business.