After the Galaxy Tab S5e, Galaxy Tab Active 2, and others, Samsung has started sending the April 2021 Security Patch update to the Galaxy Tab S7+ users. The update bears the firmware version T970XXU2BUD2/ T970OXM2BUDe and it weighs around 953.18MB in size. The size may vary if you have not installed the previous updates. As of now, it is currently rolling out in Indonesia markets. However, we can expect a wider release shortly. 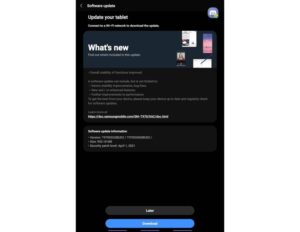 Related: Samsung Galaxy A40 and Galaxy A21s start getting the One UI 3.1 update in more regions.

The changelog states that except for the April 2021 Security Patch and Stability improvements, there are no minor or major changes available in this update. Hence, this update is only released to increase the smartphone’s security patch level. It is quite disappointing for users as they were facing a few issues with issues within the system. However, we can expect them to fix by the company in the future update.

The Galaxy Tab S7+ users from Indonesia will be notified automatically as soon as the update arrives on your device. Alternatively, users can check the update physically by making a beeline to Settings>Software updates and check for the updates. It is also suggested to maintain a minimum of 60% charging before updating to prevent interruptions.