In the Korean community forum, Samsung has checked all the users’ comments about this camera lag issue, and the In-charge of Camera department has provided a statement. The Acknowledge statement is as follows. 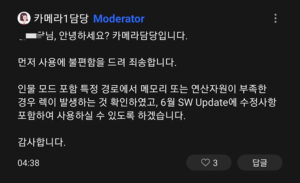 While the issue has been acknowledged, Samsung has not provided the exact release date of this problem. However, the In-charge of Camera department has said that the issue will be released in the month of June. The Galaxy S21 users will still need to be patient for a few more days or weeks to get the issue fixed.

Up Next: Samsung Galaxy A10 gets the May 2021 Security Patch update.