After the March 2021 Security Patch update, the Galaxy Note 20 smartphone has started tasting the latest update with new camera functions. The update carrying the firmware version N986BXXU1DUC8 weighs around 1026.61 MB in size, and as of now, it is currently rolling out in the Netherlands only. However, we can expect the wider release shortly. 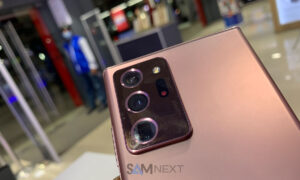 Related: Samsung Galaxy A80 gets Android 11-based One UI 3.0 update.

As expressed by the release note, the latest update brings a bunch of new features to the camera. The features include new filters for Portrait mode, an extra night option, the wide-angle lens in the Pro camera mode, and others. Nevertheless, you can experience all the changes and new features after installing the update. Apart from the camera changes, the update doesn’t pack with any major changes.

If you are a Galaxy Note 20 user from the Netherlands., a notification will pop-up automatically if the update arrives on your smartphone. Alternatively, users can also head over to Settings>Software updates and check for the updates. As it is a big update, we suggest maintaining at least 60% of charging or keeping your device connected to the power source before updating.