After the Samsung Galaxy S21 Series, Note 20 Series, and S20 Series, the Galaxy Note 10 becomes the latest device to join the May 2021 Security Patch update list. The update is rolling out on the firmware version N975FXXU7FUE3 for the Galaxy Note 10. There’s no information available about the Galazy Note 10 Plus update build version. In availability, both the updates are taking place only in German regions. 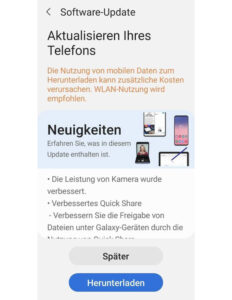 As per stated by the changelog, it houses with improvements for the camera’s performance and Quick share. It also adds the new security patch and brings improvements for the file sharing among Galaxy devices through the Quick Share. Not all security updates come with new features or major changes. However, users will be able to undergo all the changes while using the smartphone. The changelog of this update is dropped below.

Note: The update is rolling over the air (OTA) and it usually takes a week to appear on all the smartphones.

The Galaxy Note 10 and Note 10 Plus users from Germany can make a straightaway to Settings>Software updates to check the update manually if the update hits your device, download and installs to endure the changes.