Samsung has effectively conveyed the May 2021 Security Patch update to a dozen of Galaxy devices. The company has now started expanding the update to the Galaxy Note 10 Lite smartphone. The update carries the PDA version N770FXXU7EUE2, and at the moment, it is restricted to Spain. A wider release is expected shortly. 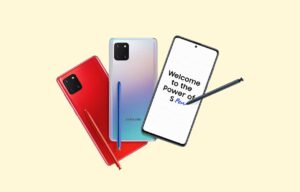 Related: Samsung Galaxy A72 starts tasting the May 2021 Security Patch update with improvements.

If we go with the changelog, the latest firmware adds a new feature in Quick Share, improves the Camera Stability & security patch level. Furthermore, it also adds the background effects function during the video call via some 3rd party apps. Apart from these, we can still expect more changes and security loophole fixes and improvements. As usual, we have dropped the changelog underneath.

Note: The company is turning the update in a staggered way, and users need to be patient for a few days to grab it.

A notification will pop up automatically for the Galaxy Note 10 Lite Spain users. If you have not received any notification, then head to Settings>Software updates and check or the updates manually.

Samsung launched the Galaxy Note 10 Lite with an Octa-core processor based on Exynos 9810 (10 nm) Chipset. The device dispatches with 6/8GB of RAM and 128GB onboard storage. In-camera department, there’s a triple rear camera that consists of a 12-MP primary camera, 12-MP telephoto lens, and a 12-MP ultrawide sensor. The phone loads with Android 10 and packs a 4,500 mAh battery.