Samsung Galaxy MWC Virtual Event will be held on June 28

Last year, the MWC event was cancelled due to the COVID-19 pandemic. And in May 2021, Samsung has confirmed that it will attend the Mobile World Congress event, which will be held on the 28th of this month (June 28). A few hours back, the Korean giant has released a bulletin confirming the Galaxy MWC Virtual Event. 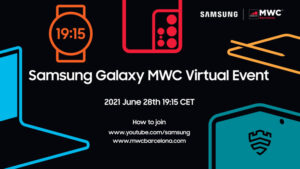 According to the company’s information, the event is going to be held on June 28. The event will start streaming strictly at 19:15 CET, and it will be streamed on the official MWC website and YouTube. At the event, Samsung will be showcasing how the Galaxy ecosystem of connected devices is set to provide people with even greater possibilities for enriching their lifestyles.

Apart from this, the company additionally said that it would unveil its vision for the future of smartwatches with new opportunities for both developers and users designed to deliver a new era of experiences.

On the other hand, a few reports have recently confirmed that the next generation Galaxy Watch Series sale will begin on August 27. So, keeping it in point, we can only expect a glimpse of its upcoming products, and they will be released later in the Galaxy Unpacked event, which is expected to be held on August 3.

Moreover, there’s no word available about the Wear OS and Tizen OS merge. However, we can expect more information to anticipate in the Galaxy MWC Virtual Event. The other leaks have previously confirmed that the Galaxy Watch 4 Series will run on the new Wear OS. But, the Galaxy Watch 3 Series owners’ faith does not know whether receive the new Wear OS or Samsung will develop the Tizen OS only for the Watch 3 Series.

Up Next: WFA approves Android 11 update for the Galaxy XCover 4S, Galaxy M02, and Galaxy A02.