The Korean giant – Samsung has officially unveiled a brand new smartphone in Thailand named Galaxy M62. The Galaxy M62 is the rebranded version of the newly launched Galaxy F62. The key specs of the smartphone include Exynos 9825 SoC Chipset, 8GB RAM, 7,000mAh battery, and much more. 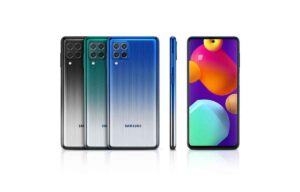 Must See: Samsung Galaxy S20 Plus starts getting One UI 3.1 update with eSIM functionality.

The new Galaxy M62 sports a 6.7-inch FHD+ Super AMOLED Plus display with a resolution of 1 080 x 2400 pixels. Under the hood, it is powered by an unnamed octa-core SoC Chipset. As it is a rebranded version of Galaxy F62, it might be powered by the Exynos 9825 SoC in most cases. It comes with 8GB of RAM and 128GB of internal storage. Furthermore, it can be expandable up to 1TB with a microSD card.

Coming to the central part – the camera, it comes with a quad rear camera that compromises of 64-MP primary camera with f/1.8 aperture, a 12-MP secondary sensor with f/2.2 lens, and other two 5-MP cameras with f/2.4 lenses. It hosts a 32-MP single front-facing camera (f/2.2) equipped inside a hole-punch cutout for selfies and video calling.

The device runs Android 11 based One UI (Skin) out of the box. Moreover, it is backed by a 7,000mAh battery with 25W fast charging support. There’s also a side-mounted fingerprint scanner for security. The connectivity options include dual-band Wi-Fi, 4G, Bluetooth v5.0, GPS, NFC, 3.5mm audio jack, and a USB Type-C port. The smartphone measures 163.9 x 76.3 x 9.5 mm and weighs 218 grams. 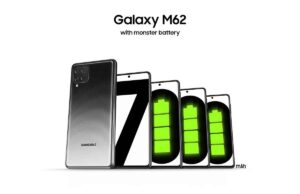 Up Next: How to enable the eSIM functionality on Galaxy S20 Series.