Samsung Galaxy M32 Pros and Cons: Should you buy it?

Last month, Samsung introduced the Galaxy M32 in Indian markets under its Galaxy M Series lineup. The device was priced at Rs. 14,999 for the base 4GB RAM + 64GB storage variant and Rs. 16,999 for the 6GB RAM + 128GB Storage model. Like the other massive battery devices, Samsung also trades the Galaxy M32 with the tagline #BingeMonster. The smartphone is going to be a good competitor for the medium price range users. So, here are a few pros and cons of the Galaxy M32, which you need to check before buying it. 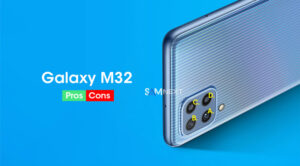 Before going ahead, let’s have a quick overview of the specs of the device. The smartphone features a 6.4-inch Super AMOLED display paired with a 90Hz refresh rate and a 1080 x 2400 pixels resolution. Under the hood, the Mediatek Helio G80 (12 nm) Chipset powers the device. It pairs with 4/6GB of RAM and 64/128GB onboard storage.

In-camera department, Samsung has added a quad camera on the rear side. On the front side, there’s a 20-MP camera for capturing selfies and attending video calls. Out of the box, the device runs Android 11 OS and equips a 6,000 mAh battery.

Long-lasting battery: At first, we need to thank Samsung for adding such a massive 6000mAh battery for the device. Furthermore, it also pairs with a 25W fast charging support, and there’s also a 15W fast charger inside the box. The phone can be charged from 0 to 100% within two and half hours.

Good-looking design: Design generally plays a key role, especially while selecting the smartphone. And keeping it in mind, Samsung has designed the Galaxy M32 so that the customers can never ignore it by taking design as the key point. The smartphone looks pretty, and the shimmering lines on the rear side exhibit different hues when light fans on it in the right direction.

FHD+, 90Hz sAMOLED screen (Display): Since the past few years, Samsung’s display panels are working perfectly, and they are good. The phone sports a 6.4-inch, sAMOLED FHD display coupled with 1080 x 2400 pixels resolution. Furthermore, a Gorilla Glass 5 protects the device on the front side. The Galaxy M32’s display is one of the best in the price range to wrap up simply.

Good Cameras: As mentioned earlier, the phone equips a quad rear camera that compromises a 64-MP Primary camera (f/1.8), 8-MP ultrawide lens (f/2.2), 2-MP Macro lens (f/2.4), and a 2-MP depth sensor (f/2.4). And for selfies and video calls, there’s a 20-MP camera with an f/2.2 aperture. Everything is fine, but unfortunately, the Galaxy M32 won’t adjust the exposure automatically.

Brand Value and Software: Samsung is a well-known huge smartphone brand internationally. If any problem arises in the future, you can get it repaired in your surroundings as there are several care centers available in India. Regarding the software, the device will get two major Android updates, and it will also receive security patch updates regularly for up to three years or more.

Performance: The device is powered by an Octa-core processor-based Mediatek Helio G80 (12 nm) Chipset paired with Mali ARM G52 GPU. Everything was up to the mark, but unfortunately, the Galaxy M32 has a weak processor, and as a result, the performance is also not up to the mark. Sadly, the device cannot compete with the same price range smartphones like Poco X3, Moto G40 Fusion, etc.

15W charger: The device has a 6,000 mAh battery, and Samsung has included the 15W charger in the retail box. So, it usually takes a lot of time to charge the smartphone. There are a few other smartphones in the market which offer a good charging speed even though they don’t equip with a massive battery.

Body and Feels: Even though the smartphone looks pretty, the body is made with plastic material. And something is lacking while using the smartphone, which isn’t giving a good feel.

No HD/HDR streaming support on OTT services: Although the smartphone has an sAMOLED display panel, unfortunately, you will not be able to stream content in OTT services in HD or HDR. It is quite a disappointing feature from Samsung.

No 5G Connectivity: The top variant of the Galaxy M32 costs around Rs. 16,999, and even it doesn’t come with 5G support. So, instead of paying the amount for the top model, users can prefer some other device in the price segment with 5G connectivity.

So, these are the five pros and cons of the Galaxy M32 smartphone. Before buying the device, make sure to check all of them so that you may not feel disappointed in the future. If you are a Galaxy M32 user and feel there are others apart from this, you can feel free to tell us via the comment section below.