It looks like Samsung is working on the new device in the Galaxy M Series, which is named Galaxy M32. The new Galaxy device has recently appeared on multiple certification websites in the past few days. Now, the Galaxy M32 has received the FCC Certification carrying model numbers and a few other information. 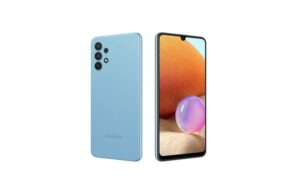 The United States FCC Certification listing has confirmed that the device will equip 15W fast charging support. Moreover, the device comes with the model number SM-M325FV/DS.

Apart from these, a few connectivity options of the smartphone have also been revealed. The Connectivity features include GSM, WCDA, LTE, Bluetooth v5.0, WLAN 802.11 a/b/g/n/ac, and NFC. There’s also a USB Type-C to Type-A cable. 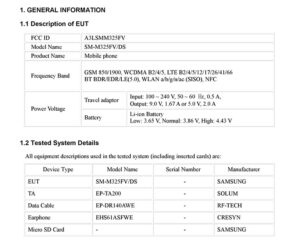 Furthermore, the listing has confirmed that the Galaxy m32 will come with a 3.5mm audio jack and load with earphones (EHS61ASFWE). It is also noticed that the device may also feature a punch-hole style display in the centre for the front camera.

The unreleased Galaxy M32 has visited the WFA website while running the Android 11 operating system with the model number SM-M325FV/DS. Unfortunately, there are no more details available in this listing apart from the details as mentioned above. You can also check our dedicated article for precise information. 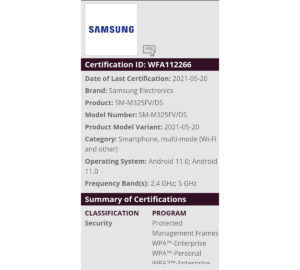 Last month, the Galaxy M32 visited the Bluetooth SIG Certification website carrying the model numbers SM-M325F_DS and SM-M325FV_DS. It is confirmed that the device will pack the Bluetooth v5.0 out of the box. You can check our article to find more details of this update. 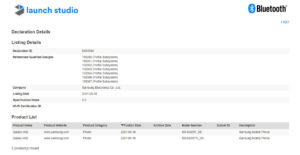 Two months back, the Galaxy M32 has arrived on the DEKRA Certification website with a few key specifications. As per the listing, the smartphone features include a 6,000 mAh battery, Exynos 9611 (10nm) Chipset, a triple rear camera, a 32-MP selfie camera, and a 6.4-inch display. More details can be found in our dedicated article.