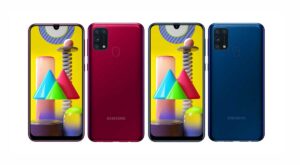 Must See: Samsung launches Galaxy A32 in South Korea with a 90Hz refresh rate and 5,000mAh battery respectively.

The latest software update bears a firmware version number M315FXXU2BUC1 and a download size of over 1GB. The update brings March 2021 security patch alongside. According to the changelog, it is mentioned that the update improves the performance of the camera, device, and security. The update also adds some features like an enhanced clock app, Private share, improved UI design, eye comfort shield, and many more.

If you are a user residing in India, you can check the updates by heading to settings>> software settings>> check for updates>> download and install. The update is expected to roll out in other regions very soon.

Galaxy M31 hosts a 6.4-inch super AMOLED display with 1080×2340 pixel resolution. The device was launched on Android 10 One UI 3.0. Coming to the camera, the smartphone is equipped with a 64MP primary camera, 8MP wide-angle camera, 5MP macro camera, and a 5MP depth sensor. The smartphone is available in 6GB/8GB variants with an internal storage of 64GB/128GB. The device houses a 6,000 mAh battery with 15W fast charging.

Up Next: Samsung Galaxy S9 and S9+ gets March 2021 Security Patch update.