From the past few hours and days, many Samsung devices have crossed many certification websites. In the meanwhile, the Samsung Galaxy F52 5G (SM-E5260) has received certification Bluetooth SIG website. The device has already passed the 3C Certification website carrying a few specifications last month itself. 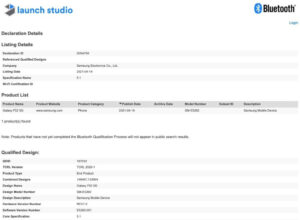 Coming to the previous leaks, the device has crossed the 3C Certification carrying a few key specifications. Interestingly, the Galaxy F52 5G has appeared with the same model number SM-E5260. The 3C Certification confirms that the device will support fast charging up to 25W. Apart from these, there’s no information available about the device on this listing.

In a piece of related news, the Samsung Galaxy M32 4G has arrived on DEKRA certification, confirming a 6,000 mAh battery.