Last month, Samsung released the Android 11-based One UI 3.1 update for the Galaxy A70s users. Now, the company has started rolling out the April 2021 Security Patch update to the Galaxy A70s users. The update bears the firmware version A707FXDX3CUD1, weighs nearly 154.72MB in size, and presently, it is spinning out in India. 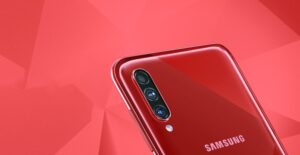 As mentioned in the changelog, the new update brings the April 2021 Security Patch, and apart from that, there’s nothing new in this update. So, this update is only meant to increase the smartphone’s security patch level. On the off chance, the update might also include stability improvements, bug fixes, new/and or enhanced features., and further improvements to the performance. 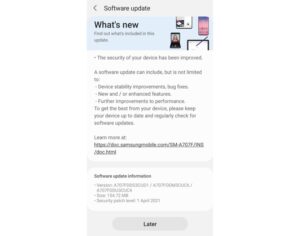 (Thanks for it Rohit)

The Galaxy A70s users from India will receive a notification automatically if the update reaches their device. Alternatively, users can also navigate to Settings>Software updates to manually check the update status.

Note: Keep in mind that the update follows the staggered rollout, and it usually takes a week to arrive on all the devices. So, users need to be patient for at least one week to experience the update.