Samsung is all set to debut another new smartphone in Galaxy A series named Samsung Galaxy A52. A couple of moments back, the company has officially confirmed the launch by Scheduling Launch Event on March 17. Based on the multiple listings, the device is rumored to be available in the LTE version and 5G version and is expected to debut in India on March 17. Ahead of the launch, the YouTuber Moboaesthetics has unboxed the Galaxy A52 and showed off the in-box contents and a few specifications. 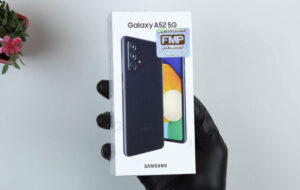 As per the video, the ‘FMP’ logo on the brand box is one of Saudi Arabia’s retailer websites. It with the model SM-A526B/DS, and the unboxed device was the 5G variant. Below is the list of in-box contains which were shown in the video.

The device is powered by Qualcomm Snapdragon 720G processer paired with Adreno 618 GPU. It comes with 8GB RAM and 128GB of internal storage. It is also expected to be available in other variants. The smartphone runs on Android 11-based One UI 3.1 (Skin) out of the box. The Galaxy A52 hosts an AMOLED display with a 90Hz refresh rate.

In-camera, the device sports a quad rear camera that assembles with 64MP + 8MP+ 5MP + 2MP cameras. On the front, it may host a 32-MP camera on the front for selfies and video calling. A few connectivity options include a USB-C port, the primary mic, 3.5mm audio jack, etc. As of today, only these official specifications and features of the smartphone are available. However, we can also expect the remaining specifications shortly in the coming days as the launch is getting nearer.