Samsung Galaxy A50 starts getting the June 2021 Security Patch update

It’s just the first day of June, and Samsung has released the new security patch update to many smartphones. The company has started rolling out the June 2021 Security Patch update to the Galaxy A50 smartphone users. The firmware version A505FDDU8CUE4 can identify the new update weighing 553.53MB in size. The new firmware is currently taking place in India, and there’s no word available about the other countries.

Regarding the changes, as described in the changelog, the firmware doesn’t dispatch with any changes or new features, apart from the very latest security patch. As the update size is slightly larger, we can still expect little bug fixes, enhancements, and improvements from this update. Nonetheless, users will be able to experience all the changes if added. 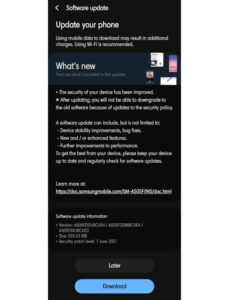 As always, the OTA updates are turning out in a phased way, and hence, users need to be patient for a few days or weeks to grab this new update. However, the update can also be checked manually by heading over to Settings>Software updates and download & install it if available.