Samsung Galaxy A31 receiving Android 11-based One UI 3.1 update

Samsung is consistently rolling out a couple of new updates to all its smartphones as per the schedule. Recently, many more devices like the Galaxy M30s, Galaxy A51 and others have picked the Android 11 updates. Now, it’s the Galaxy A31 tasting the Android 11-based One UI 3.1 update. The update is currently rolling out in its own country (South Korea), carrying the firmware version CUD3, and it weighs nearly 2036.12 MB in size. 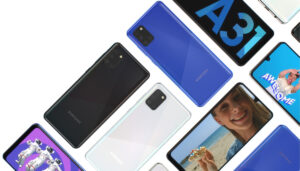 According to the schedule, the Galaxy A31 should receive the Android 11 update in May/June. But thanks to Samsung for making the update early for the Galaxy A31 users. As the device moves to One UI 3.1 from One UI 3.0, the latest update may pack with new features, improvements, fixes for well-known issues, enhancements, etc.

As it is a One UI 3.1 update, it might include new features like Google Discover feed integration, Google Home Device Controls, Video call effects, Continue apps on other devices, etc. Apart from this, we can also expect the latest security patch in this update.

Note: Samsung is rolling out the updates in a phased manner, and users need to be patient for a couple of days to experience it. In the meantime, you can head to Settings>Software updates and check for the updates. If the update is available, then install it to experience new changes/features and improved performance.