In recent days, the Galaxy A22 has passed multiple certifications, including FCC, Bluetooth SIG, and there were also many leaks about the smartphone. However, clearing all of them, the Korean giant has announced the Galaxy A22 as a new entry-level smartphone under the GalaxyA Series. The pricing and availability information of the smartphone still remains a mystery at the moment. 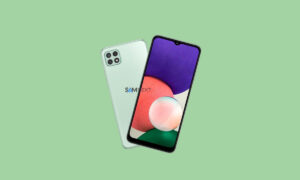 If we go ahead with official specifications, the Galaxy A22 features a 6.4-inch Super AMOLED Infinity-U display with a 90Hz refresh rate. The phone measures 159.3 x 73.6 x 8.4 mm in dimensions, and an Octa-core processor-based MediaTek Helio G80 Chipset powers the device. On the board, the device comes in three variants: 4GB RAM + 64GB storage, 4GB RAM + 128GB internal storage, and 6GB RAM + 128GB storage as the high-end model. Furthermore, the device can be expandable up to 1TB via a microSD card.

In terms of camera, the Galaxy A22 hosts a quad rear camera setup that compromises a 48-Mp Primary camera with f/1.8 aperture, 8-Mp ultra-wide-angle lens with f/2.2 as aperture, 2-Mp depth sensor with f/2.4 lens, and last but not least, a 2-MP Macro sensor with f/2.4 aperture. At the front, the gadget offers a 13-MP camera (f/2.2) for selfies and video calling.

The Galaxy A22 boots with Android 11-based One UI 3.1 (Skin), and a 5,000 mAh battery backs the device with 15W fast charging support. For security, there’s a side-mounted fingerprint scanner. The smartphone is available for purchase in different color options: Black, White, Mint, and Violet. The other features include Bluetooth v5.0, 3.5mm audio jack, LTE, GPS, NFC, and a USB Type-C port.