A month after the fruitful rollout of new updates to many devices, Samsung has now begun sending the March 2021 Security Patch update to the Galaxy A20s and M12 users. The updates are gradually rolling out to the respective devices. The firmware version and other information of these updates are as follows.

If we go with the Galaxy A20s update first, the update appears on the build version A207FXXX2BUD2, weighs almost 144.37MB in size, and currently, it is seeding to the Indian users only. Besides the latest March 2021 Security Patch, there’s nothing new or changed in this update. 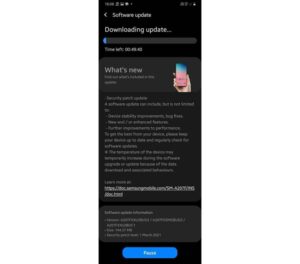 The Galaxy A20s is consistently receiving the updates regularly. Here are the details of the previous February 2021 Security Patch update. 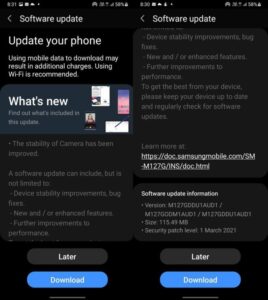 Note: The updates are gradually rolling out to the Galaxy A20s and M12 in a staggered way. As a result, users need to be patient for at least one week to experience the update.

However, the Galaxy A20s and Galaxy M12 users will encounter a notification when the update arrives on their smartphones. To manually check the update status, head to Settings>Software updates>Check for the updates.