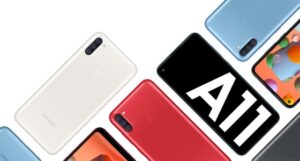 Regarding the availability, the firmware is rolling out in the United States, and more countries are expected to follow soon.

Regarding the changes, expect the latest April 2021 Security Patch, there’s nothing new or changed in this update. Hence, this update is pushed only to increase the security level of the smartphone.

As it’s the initial release of the update, it generally takes a couple of days to hit all the devices. However, the Galaxy A11 users will receive a pop-up notification if the update arrives. To manually check the update, head over to Settings>Software updates.