From the past week, Samsung has been updating its stock apps to improve their performance on all the devices. Earlier this week, a community in charge of Samsung Files has released the My Files new update notice in advance along with the full changelog. And now, many users across the world have begun testing the new update with the build version 12.2.00.251. 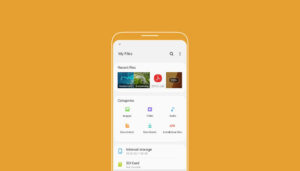 Concerning the changelog, the update dispatches with multiples changes, improvements, and new features. You can check all of them below.

Previously, users were facing issues with the default view of File Manager, which shows all the folders of the root folder instead of hiding them. However, Samsung has now added the ‘Required’ filter option through which users will be able to hide root folders and show some of the many folders in the internal memory Root (top location).

Upon selecting the ‘Required’ filter, the essential folders like DCIM, Download, Music, Pictures, etc., will be displayed automatically. And the other folders like Alarms, Audiobooks, Documents, Movies, Notifications, Podcasts, Ringtones, Recording will not be displayed if they are empty. Furthermore, the folders created/renamed/copied/moved by the user in the My Files app will always be displayed with the mandatory filter applied.

Samsung is also introducing the sticky navigation rail to large-screen models like Galaxy Fold and tablets. With this new feature, you will be able to navigate quickly to the sticky elements such as Recents, Music, Downloads, Google Drive, and so on. Moreover, the update also introduces the Standard Drawer screen to expand the sticky elements in the Navigation Rail screen. The Navigation Rail and Standard Drawer are switched each time you press the More menu in the upper left corner.

Run a file in multiple windows

Forthcoming to the other features, the new update also introduces a new feature to run the file viewer in multiple windows. You can simply press and hold the file you want to run and select Open in New Window or Open in Another Window from the menu that appears.

The non-multi-window-state opens in a new window; in the multi-window state and opens in another window, a menu appears. As shown in the image, the target file is launched in a window other than how the My Files app was launched.

Samsung has also added an option through which users can back up & Restore their Favorites folder. It’s also worth noting that the backup/restore of the items you set as your favorites is supported through Smart Switch so that you can keep the list of favorites from your old device, even on a new device.

Allow Copying and moving files within the same category

Last but not least, the Korean giant has also introduced an option through which the users can copy and move the files within the same category. According to the company’s information, Copying and moving to categories is now possible only within the same category (e.g., image category A folder -> image category B folder). It means copying/moving between different categories or from a physical area such as internal memory to a category is not supported.

Up Next: Samsung releases the July 2021 Security Patch update to the Galaxy S10 Series.