It looks like the Chinese brand – Redmi is gearing up for the launch of a new gaming smartphone in its home country (China). In a recent leak, a new Redmi gaming smartphone has surfaced online with a few key specifications. As per the leak, the device is expected to launch in the selected markets by the end of April. 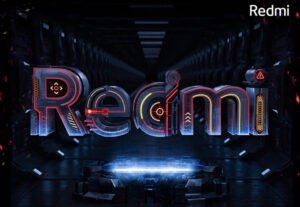 Talking about the tipped key specifications, the phone packs with the Samsung E4 AMOLED display, supporting a 144hz refresh rate. Moreover, the phone might be powered by a Mediatek Dimensity 1200 Chipset coupled with an Octa-core processor. Moreover, the device is also expected to carry a price tag of Rs. 22,861 ($306). 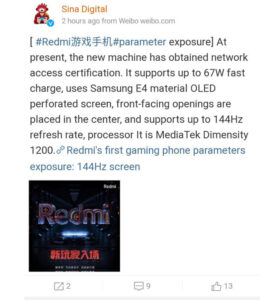 The new gaming smartphone is expected to be backed by a 5,000mAh battery, including fast-charging support up to 67W. A few days back, the device has passed the 3C Certification website with 67W Fast Charging Support.

Moreover, the device may feature a 64-megapixel (Sony IMX686) camera on the rear side. The new device will run Android 11-based MIUI 12.5 (Skin) out of the box.