According to the rumours, Samsung is preparing to launch the Galaxy Z FOld 3 and Galaxy Flip 3 in its next unpacked event on August 11. As the Galaxy Unpacked 2021 is getting closer, smartphones have started clearing multiple certifications. Today, the Galaxy Z Fold 3 (SM-F9260) and Galaxy Z Flip 3 (SM-F7110) has surfaced on the TENAA Certification website carrying some key specs. 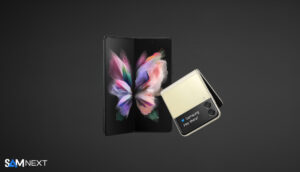 The devices have cleated the listing with model numbers SM-F9260 and SM-F7110. A few smartphone specifications, including the Chipset, battery, camera, and display, have been revealed.

Talking about the Galaxy Z Fold 3’s TENAA listing, it hosts a 6.2-inch external display and a 7.55-inch foldable display. Concerning the battery, the phone houses a 4500 mAh battery that includes the combination of 2155 mAh and 2345 mAh batteries. The smartphone measures 128.1mm x 158.2mm x 6.4mm, and the weight info is not available. And according to the leak, the device will run Android 11-based One UI 3 skin. In most cases, it could load with Samsung’s new One UI 3.1.1.

Forthcoming to the Galaxy Z Flip 3 (SM-F7110), the phone will sport a 6.7-inch punch-hole style display. Moreover, the listing revealed that the gadget would come in dual-tone colour. Apart from these specifications, the other details of the device were not available in TENAA’s listing.

According to the previous leaks, it is rumoured that the Galaxy Z Fold 3 will fuel with Snapdragon 888 Chipset under the hood. In optics, there is a 12MP triple rear camera and a 16MP under-display camera for selfies and video chats.

At the same time, the Galaxy Z Flip 3 is rumoured to ship with the Snapdragon 888 in the United States and Exynos 888 Chipset for the remaining regions.

Besides these, there’s no more information available about the smartphone in the recent listing. However, as the days are passing, we can expect more information to anticipate within the next few days.

UP Next: HBO Max is the second most downloaded streaming app in Q2 2021, YouTube comes first.