In recent times, we have seen multiple leaks and renders about the upcoming Galaxy Watch Series. Ahead of the launch on August 11, the live images of the Galaxy Watch 4 Classic have been surfaced online. 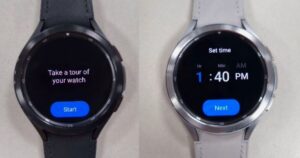 These live images are procured by 91mobiles from a trusted source who wishes to be anonymous. According to the photos, the Classic model of the Galaxy Watch 4 can be seen clearly. The Watch will mostly debut in two color options: Silver and Black.

There’s a physical rotating bezel, and we can also see the two buttons on the right side of the Watch, which are generally used to do several actions. As the images are captured at initial setup stage, we can see only the quick tour window and the time settings. The user interface of the Watch remains a mystery at the moment.

If you are surprised to see the One UI Watch on the top, Google and Samsung have partnered to create the next generation of the Wear OS. It means the Korean giant will no longer use its Tizen OS for the Galaxy Watches. All the upcoming watches will be based on the newly developed os by Samsung and Google.

A couple of days back, the name of the new os has been revealed by Samsung. The new Wear os will be called officially as the Wear OS 3. In contrast, the name will be One UI Watch from Samsung’s end.

UP Next: Samsung Photo Editor App gets a new update with add-ons and changes.