From the past few months, we have seen multiple rumors and certifications about the upcoming Samsung devices. And a month earlier, it has been confirmed that the next Galaxy Unpacked event is going to be held on August 11, 2021. During this event, Samsung is planning to announce the Galaxy Z Flip 3, Fold 3, Galaxy Watch 4 Series, and the One UI 3.1.1 Skin. Ahead of the official event, Samsung has released a new trailer that has showcased the Galaxy Z Fold 3. 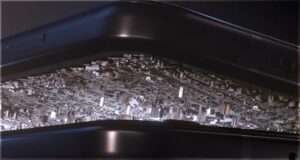 Coming to the video part, it has shown off the old smartphones from different companies like Nokia, Blackberry, Motorola, and others. The trailer especially conveys the change in the generation of smartphones. After all the old generation phones, the Galaxy S20 Ultra is shown off. And after that, the inner section of the Fold 3 is displayed with movie-style graphics and the real world.

At the beginning of the video, you will not understand that it is the hardware section of Fold 3. In the end, a clear overview of the internal section can be seen. Apart from this, the latest trailer doesn’t reveal any more design parts or specs of the smart devices.

Related: Samsung starts testing One UI 3.1.1 for the Galaxy S21 Ultra, release expected by the end of August.