In the Q3 of 201, Samsung introduced the Galaxy M10s with the Android v9.0 Pie operating system. And last year, the Korean giant has reportedly discontinued a few Galaxy M Series smartphones, including the Galaxy M10s. Presently, the Galaxy m10s users from India have begun acquiring the Android 11-based One UI 3.1 update. The update carries the firmware version M107FXXU4CUF5, and it weighs around 1911.90 MB in size. The size usually varies if you have not installed the previous updates.

Similar to the other Android 11 updates, it also includes a couple of new features, new add-ons, optimizations, and improvements. Furthermore, the new update also incorporates the June 2021 Security Patch inside it.

Apart from this, you will also be able to identify and improve your digital habits. The digital wellbeing features make it easy to check how you’re using your phone or tablet and help you form good digital habits. Nevertheless, you will be nothing all the changes after installing the update. 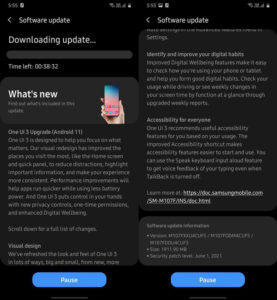 As always, it’s worth noting that the present update is also following the phase-wise rollout, and users may need to wait for a few more days to grab it. Meanwhile, the Galaxy M10s users from India can make a beeline to Settings>Software updates and check for the updates.

Up Next: Have a look at this beautiful Galaxy S22 Ultra fan-made Concept.