Since the debut of the Galaxy A50 in February 2019, the device has secured multiple minor and major updates so far. So, we have added the full list of updates that Galaxy A50 has received since our debut. The update tracker of the Galaxy A50 follows with the short info and link to the original article. Users can head to the original update article from here to find more details of the respective update. 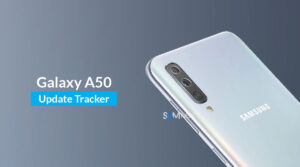 Note: This is an update tracker of the Samsung Galaxy A50 and will be updated frequently with the updates of the smartphone.

Note: It’s worth noting that all the OTA updates will be released in a staggered way, and hence, users will need to be patient for a few days to experience it.

Follow the below steps to check whether the update is available on your smartphone or not.

In case if any update shows up there, download and install it to undergo the new changes.